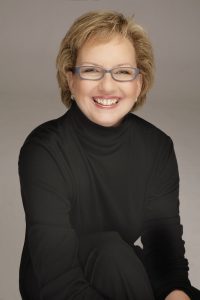 With her Courageous Leadership keynotes and programs, Cindy has helped hundreds of companies around the world identify, nurture and leverage the leadership potential in both their front line employees and their leadership teams. Cindy counts among her clients 26 J.D. Power Award winners, and industry leaders such as Google, Alaska Airlines, UPS, Oracle, Wells Fargo and The Ritz-Carlton, among others.

One of the most highly sought-after leadership speakers in the world, Cindy Solomon has traveled the globe sharing her provocative, and often hilarious insights on business, customer service and courage with tens of thousands each year. She is also founder, CEO and President of the Courageous Leadership Institute ™ , an organization that specializes in working with companies, nonprofits and associations around the world to introduce Courageous Leadership ™ as a daily practice at every level - building teams that are uniquely equipped to meet the needs of a changing and disrupted marketplace.

Cindy is also a best-selling author on the topic of leadership, with books Creating a Culture of Courage, and The Rules of Woo both available on Amazon. Learn more about Cindy at www.cindysolomon.com, and follow Cindy at @cindysolomon. 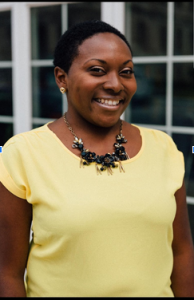 This breakout session will encourage and empower leaders to discover all they possess and how it can benefit others.

Shayona Funches is  a native of Marion, Indiana and a proud graduate of University of Southern Indiana where she received both her Bachelor and Master’s degrees. She gained her Social Work experience while working in schools, nonprofits, and mental health agencies. Serving on boards and attending church has allowed her to be heavily involved in community development. Shayona has organized several community events and a women's conference, Phenomenal SHE for the past 3 years. Shayona is a Certified Life Coach specializing in Personal Development.  Shayona is passionate about community development and helping others to understand themselves better and reach towards their goals. This passion combined with years of life and work experience  lead to the establishment of Strength & Dignity, Life Coaching and Consulting where she provides guidance to her clients as they navigate the personal development process through coaching and/or consultation. Shayona Funches is a wife and mother of three beautiful children. 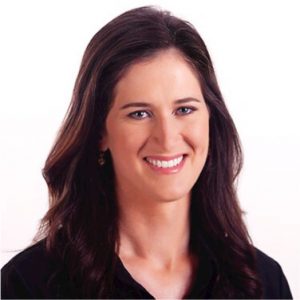 Learn guiding principles for success from the experiences of a Marion-native, Lieutenant Commander Elizabeth Grider, United States Navy Reserves.  Elizabeth will share her tips for how to succeed in professional and personal life based on her experiences from the cockpit of a Navy helicopter, on the flight deck of an aircraft carrier, and at a fast-paced tech company.

Elizabeth was born and raised in Marion, Indiana.  She graduated from Marion High School in 2004 and attended college at the United States Naval Academy (USNA) in Annapolis, Maryland.  She graduated from USNA in 2008 with a Bachelors of Science majoring in International Relations and Commissioned into the United States Navy as a Pilot.  After completing two years of flight school and earning her wings of gold, she flew the MH-60S helicopter for the Navy.

Her first duty station was at Helicopter Sea Combat Squadron TWO-FIVE (HSC-25) in Yigo, Guam.  At HSC-25, she performed 24/7 Search and Rescue duties for Guam, the Central Northern Marianas Islands and the surrounding seas, rescuing over 15 military and civilian personnel in various missions.  She also deployed to Japan and the Southeast Pacific on three different occasions, deploying on the USNS AMELIA EARHART, USS GEORGE WASHINGTON, and the USS BONHOMME RICHARD.  After Guam, she returned to USNA to be an Admissions Counselor and travelling recruiter, helping to educate tens of thousands of high schoolers around the country on the benefits of attending the Naval Academy.  Her last active duty station was aboard the USS THEODORE ROOSEVELT, where she deployed to the Pacific and Persian Gulf as a "Shooter" or Aircraft Launch and Recovery Equipment (ALRE) Officer.  She directly supported the safe launch and recovery of over 5,000 jet aircraft in support of numerous operations in the Middle East.  Also while on her last deployment, she finished her Masters of Arts in Leadership and Ethics from the Naval War College.  Throughout the course of her Naval career Elizabeth consistently led Sailors, whether it was in an aircraft, on the flight deck or, on land.  No matter the role, she dedicated herself to servant-leadership, helping her Sailors achieve their own aspirations, which earned her the respect of her Sailors and peers alike.

At the end of active duty, Elizabeth partnered with Shift.org in a military-to-civilian transition program which helped her successfully transition to a civilian career at ID.me.  ID.me is a technology company located in Washington D.C. that specializes in digital identity verification and two-factor authentication.  At ID.me, she successfully supervised all aspects of the Healthcare vertical (sector) by leading new partner software integrations, managing on-going partner relationships, and standing up a secure, online messaging platform for national COVID-19 response.

Recently, Elizabeth decided to move on from ID.me and move home to Marion, Indiana with her husband, Mike, dog, Bella, and cat, Pirate, and they are expecting their first child in December 2021.   Looking forward to the next chapter of her life, Elizabeth is excited to finally be home after being away from family and friends for so long.   Elizabeth continues to serve in the Navy Reserves. 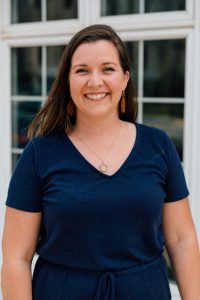 In this breakout session, you bring your threads. They might look like your strengths, passions, expertise, beliefs, challenges, traumas, and limitations - the colors and textures making up what is distinctly and uniquely you. I'll bring some threads too! My story and research-based well-being interventions with tips and tricks for how to weave them into your life in a way that works with what you already have, instead of asking you to add more, get more or be more. We will start a conversation and weave together a well-being practice postured toward joy, liberation, and efficiency.

Megan Gilmore is the Founder and Executive Director at Lark's Song Inc. with a vision to courageously co-create a more fulfilled and flourishing world. She is a professional coach and well-being educator who trains, writes, presents, and speaks on trauma-informed approaches to transformation, positive psychology, and nature-based restoration.
Megan has a bachelors degree in psychology and leadership studies, a masters degree in addictions counseling, and post-graduate national and international certifications in coaching.
She loves blending and brewing in her home apothecary, gardening, travel, caramel-anything, and playing board games with her family. 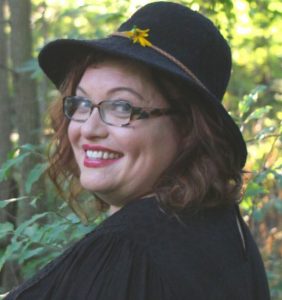 "Settling Into Your Skin: Embracing Identity as Both Anchor and Catalyst"

In patriarchal societies women are taught to devalue their identity and instead pursue an unobtainable version of womanhood where our value is tied to relinquishing our power, authority, autonomy, and dreams.  In this session participants will learn how our true identity can become both the anchor that centers us in the known and also the catalyst that propels us into the unknown.

Angela J Herrington MA, LSCC is a faith deconstruction coach at AngelaJHerrington.com who helps women break free from toxic religious culture & empowers them to recover from #churchhurt. She is also the owner of ReEngage.biz, a digital consulting agency that helps organizations scale, automate, and create more impact.

She describes herself as a recovering prodigal, Jesus-follower, and a guide who creates sacred spaces for vulnerable exploration. Angela is an egalitarian who believes equally valuing and embracing both the masculine and feminine aspects of our souls is God’s original design. She is a fierce advocate for honest conversations, creating emotional safety, and increasing our self awareness as spiritual practices. She truly believes showing up for people who feel unseen, and saying “I see you and God has always seen you.” is our greatest mission as Christians.

Using a unique blend of life coaching, spiritual direction, and fierce advocacy, Angela empowers women to kick impostor syndrome to the curb so they can boldly pursue their God given calling.

Angela is a dynamic speaker who creates enormous value for her audience. She receives rave reviews at women’s ministry events, writer’s conferences, podcasts, summits, and business workshops. She is known for crushing complex topics down to bite sized pieces and sending her audience home with actionable steps to apply their learning. A true Gen Xer, Angela loves thinking outside the box, combining things that are seemingly unrelated, and helping women create a unique and vibrant life that perfectly suits their soul.

Angela is also Lark’s Song Certified Life Coach and is currently Director of Communications for Wesleyan Holiness Women Clergy, a women led organization dedicated to engaging, empowering, and equipping women to lead in the church. She holds a BA in Biblical Studies from Indiana Wesleyan and a Master’s in Leadership from Wesley Seminary where her research focused on leadership development, mentoring, and opportunities for GenX Women in the US church. 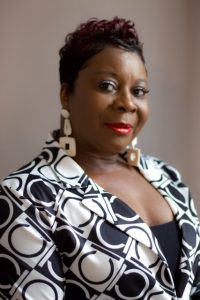 "Building an Unapologetic Personal Brand: Elevating Yourself to a Level that Makes You Proud."

Cathy Weatherspoon has led Thriving Grant County, Mill Township for nearly four years as the Executive Director.  Before her appointment at Thriving Grant County, Cathy worked at Taylor University for 12 years. She held the status of assistant professor and directorship in Student Development. She was the first director of Kids Hope, the USA, in Grant County and worked as a career coach at Project Leadership. Cathy serves as an Officer on the Board of Directors for Carey Services, Commissioners of Marion Arts Alliance, Circles of Grant County, and Community Outreach Committee at College Wesleyan Church. She received a master's in Science Management from Indiana Wesleyan University. In 2015, Randall L. Tobias Center for Leadership Excellence, Indiana University, has a life coaching certification through Lark's Song Coaching Academy 2018 and obtained a Fund-Raising Management certification in 2019. Cathy also has a passion for fashion and has merged her style and life experiences on her IG @cathydoesstyle. She resides in Marion with her husband, Bruce. Since arriving in the county 25 years ago, Cathy has worked diligently to better others' lives. She and her husband Bruce have been married for 35 years and have two adult children educated in the Marion Community School system. 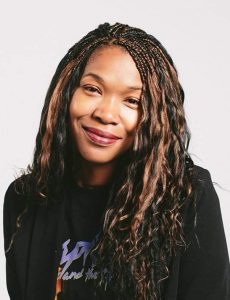 "Who Told You Not To Shine?! Leadership, Transformation and Authentic Presence"

This session will explore leadership in a world that often tells women to shrink, hide or diminish their light. Participants will hear Torri’s personal path from very (VERY) reluctant leader to community leadership and community transformation. Together we will explore showing up unapologetically and authentically, limiting beliefs and leadership that empowers you and others.

With a fierce curiosity about the world around her, Marion native, Torri Williams (BA) serves as the Intersectional Engagement Director at Lark’s Song. After completing her Bachelor’s degree in Women’s Studies and Psychology with a concentration in Race, Gender, and Ethnicity at Bowling Green State University, Torri began her career in social and community service providing direct client services with a special focus on women and youth. In addition to working directly with individuals and families, Torri has worked to provide education, coaching, and technical assistance to individuals and organizations on developing healthy relationships and workplace culture. If you spend any time with Torri, it becomes very clear that her vision and heart lay in transformative community wellness.  As a community organizer, Torri passionately works to build connectivity and amplify voices that are often underrepresented.

When Torri is not serving the community at large, you can find her in her role as the Coordinator of Chaos: parenting twin toddlers.